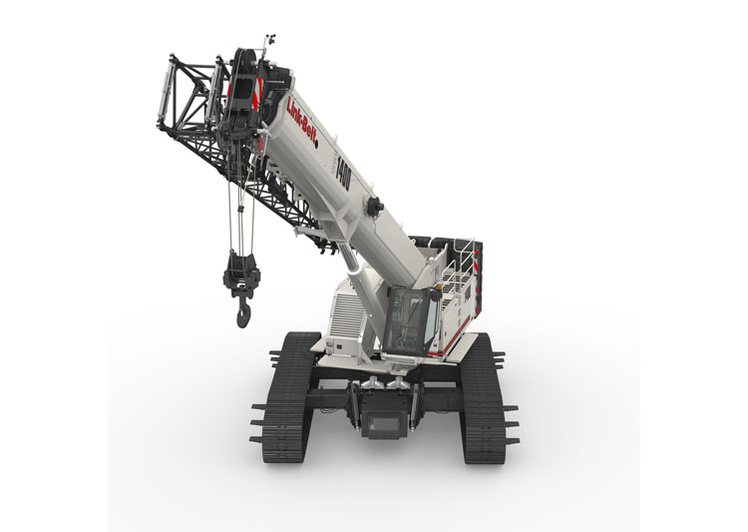 Link-Belt has been building tele crawlers for ten years and like the other models in the range the TCC-1400 is designed to be “a robust, simple, and reliable telescopic crawler crane for a wide range of users.”


Its 195.4 foot (59.5 metre) power, pin and latch boom is in six sections and is the longest in its class, the manufacturer said. A three section bi-fold lattice fly jib extends maximum tip height to 259 ft (78.9 m) and can be carried on board. Its capacity chart at radius rivals lattice crawlers of a similar base rating, the manufacturer said.

Power is from a 320 hp (239 kW) Tier IV Final Cummins QSL diesel driving variable displacement piston pumps. Features include a new auto idle feature to improve fuel economy. Engine speed is automatically reduced to idle after ten seconds of no functions being used. Preset engine speeds are then resumed on demand according to function.

Another feature is the electronic inclinometer with capacities for lifting at up to 4 degrees out of level sideways. The electronic swing brake is linked with the Link-Belt Pulse system to allow the operator to define a work zone and create a virtual wall with audible alarms and function stop. There is a tilting cab and a camera system for rear view and winches.

For easier maintenance there are PTFE boom slider pads that don’t need grease while for the points that do there is centralised lubrication system. Pressure ports for the hydraulics are also grouped together. Pressure readings can also be taken from the in-cab Pulse monitor. Hydraulic pilot operated control valves were chosen to be simple and dependable.

In transport the main load weighs under 97,000 lbs. (43,998.5 kg) and for assembly it has tapered axles instead of traditional stub axles for easier side frame installation. The TCC counterweight removal system attaches for the maximum 57,000 pounds (22,680 kg) of upper counterweight and is a 6-piece modular design that allows for capacity charts with partial counterweight. There is 25,000 pounds (11,340 kg) of carbody counterweight.

Or start looking for Linkbelt Cranes for sale.